…or how I use ultra wides like the Fujinon 14mm..

Ultra wides are fun to use however the all encompassing field of view can make good compositions difficult to achieve, while being even slightly off true level in any plane can introduce unnatural distortions. Ok the latter can be used to good effect creating dramatic perspectives, but it can also look gimmicky if not done well.

The obvious impulse is to go large and look for grand vistas. I find this is invariably a mistake. With a field of view of 21mm on the X-Pro1, the Fujinon 14mm is still a 14mm lens and its perspective reduces even the mightiest of mountains to hillocks in your images if you are not close enough. My wife took me up a mountain recently to show me the perilous route she took across the mountain on horseback. The image below was shot for fun with the X-Pro1 panorama feature and the 14mm lens. The mountains in the background are not that far away and they are over 1200m high. Where I am standing is at around 600m. The image is….well…rubbish really and gives no sense of the dramatic route that she took. A better way to take this shot would be to stitch multiple shots using a lens that is closer to the perspective of the human eye, say 50mm or so.

The second impulse, at least for landscapes, is to use F11 or higher and use the hyper-focal technique. This works well in most cases, particularly if the intended display medium is the web, but my personal preference is to use an aperture of around F8 and to manually focus on the subject. Ultra wides like the 14mm at F8 have buckets of DOF without having to worry about diffraction. Manually focusing on the X-Pro1 is very straight forward. With longer lenses the 10x magnification on the view finder is a challenge, but I find it ok on this lens. If you find it tough, drop to 3x. The real bonus of this method is that if you do decide to print large you will have a better quality image in the sense that the key subject is on the plane of sharpest focus.

Get as close as possible and manually focus on your subject

The Fujinon XF 14mm is remarkably devoid of distortion which makes it an interesting lens to use for architecture. I tend to travel a lot on business and I always carry a camera with me. Recently I was near Tower Bridge in London heading to the Regus offices there for a meeting. It was all foggy an atmospheric first thing in the morning. The City Hall  building caught my eye but I was late for the meeting so  I took a  a quick snap to remind me to go back after work, or later in the week to take some photos.

As usual work did not end early so when I came back out it was dark. I tried a number of angles, trying to get the full building in but  the results were a bit “post card from London”ish, and everything was too perfectly rendered. So I went in close to try to capture the drama of the building. For the shot below I was about  .75m from the window. The roof support is actually at that angle (you can see that from the small photo to the left). The shot was taken hand held and slightly tilted upwards to accentuate the natural lack of straight lines in this building, as you can see from the nearest vertical line on the window.

The sharp edge of the building on More London Place (don’t know the name of the building), and the vertical lines out side the hotel however required straight lines as well as being close. They were also taken handheld but you can see the lenses ability to deliver low distortion images. 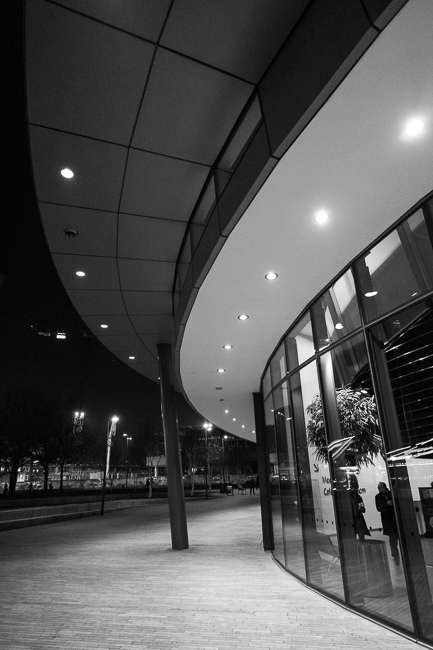 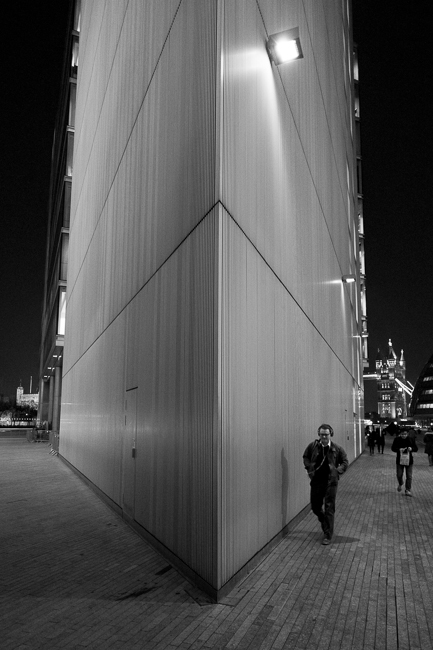 So for me the golden rules for ultra wides are:

Your methods may be different, if they are I would love to hear from you below.