The XF 60MM lens has a bad rap. Reviews around the web will tell you that its sharper than a scorned woman’s tongue, but slower to focus in low light than a politician is in making a decision. I have had the 60mm lens since it was released, but I have not used it that much as I tend to use the 35 and 18mm most of the time. I went to San Fran for christmas and it seemed like a good opportunity to get to know the lens better. I wanted to see if the lens deserved the rap and were there ways to overcome any short comings? So this is not a lens review, just some experiences in using the lens.

First let me say I cut my autofocus teeth on sport photography with a Nikon F5 and then the D2Hs, D3 etc. It was a bit of a learning curve at the start but now its second nature. My default approach is to use the AF-ON button to separate the AF  from the shutter release button. I tend use AF-C with 9 point dynamic setup. This set up gives you so much control its a godsend, I can pretty much focus and track anything and I seldom have focus failures.

Now the X-Pro1 is a different beast and requires a different way of working. For the XF 35MM and 18mm for candid work I use AREA + AF-S with the smallest focus area. Not only does this mean I can move the focus point around to suit, it reduces focus errors. The most common Auto Focus error, and I suspect why one sees so many people on the internet claim back focus issues, is the failure to fill the focus area with the subject. The AF system will then focus on the point of highest contrast, which may not be on the subject. Using a larger focus area with a wide angle lens means a lot of the FOV is fair game for the AF system and  the camera decides where to focus, using a small focus area  means I stay in control. I only get failures on these two lenses if I can not cover the area with the subject. Note for landscape I would tend to use hyperfocal focusing biased to give better focus at infinity.

This set up works well for the XF 60mm lens in high contrast situations, but in lower contrast situations it causes it to hunt a lot and fail often. There is just not enough data for the AF system to make a decision..a bit like a politician and just as annoying. Fortunately the solution is quite simple, just use more focus points i.e a larger focus area and make sure to fill the frame. You do this by hitting the AF button and rotating the selector dial left to increase the size of the focus area. For night time candid photography I have found that rotating it two clicks left from the smallest area works really well. During my night shoot in Avignon I only had two focus failures where the camera could not capture focus at all. Both of these were caused by the fact that there was no real contrast in the subject…well it is a contrast based AF system after all. Clearly you still have to make sure the subject covers the focus points or you may be disappointed, but it deals nicely with lower contrast situations.

Locking focus is one thing, the speed with which it locks is another. The Fujinon XF 60MM focuses quickly in when there is lots of contrast even in low light like the night shots below, not DSLR speed but fine for candid work and I would have no hesitation in recommending it for that purpose.  For sports….well there is always the Nikon.

Overall I am really enjoyed using this lens. It does not deserve a bad rep, you just need to find your own rhythm with it.

“well it won’t kill you but I wouldn’t eat it” – China Town, San Fran

Hot chestnuts at the Cheval Passion 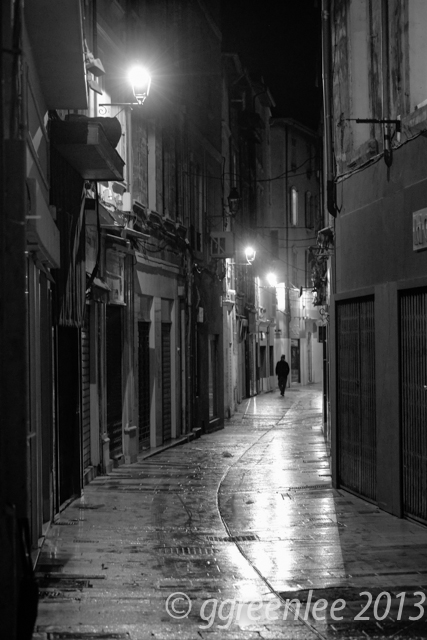 Image advice, all you need is a Harley. Avignon.

All shots in this post are taken on Fuji X-Pro1, XF60mm lens, Astia and converted in LR with yellow or red filter adjustments to tune contrast.

I noted after posting that I continued to use Nikon terminology when referring to the X-Pro1  focus system in particular using the term focus points instead of focus area. I updated the post once I realised this was causing a confusion.

Stay up to date with this blog by following me

Quick Look: Using the Voigtländer 28mm/1.9 Ultron on the X-Pro1

A walk on the wide side : Using the Fujinon 14mm

21 thoughts on “Taming the shrew: Experiences Using The Fujinon XF60mm”